The first point release of ART is out, and a brief overview of the changes can be seen in the changelog. Read on to find out more about what is new in this version.

A fundamental issue with spectral rendering is that you get “raw” result images from such a process: unless you actively intervene and correct for it, any colour cast present in the dominant illuminant of a scene directly translates to a colour cast of the final image. Consider these three renders of a Macbeth Colour Chart, diffusely lit with CIE illuminants D50, D65 and F3, respectively: 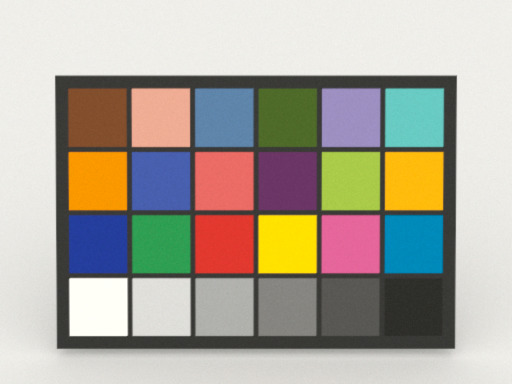 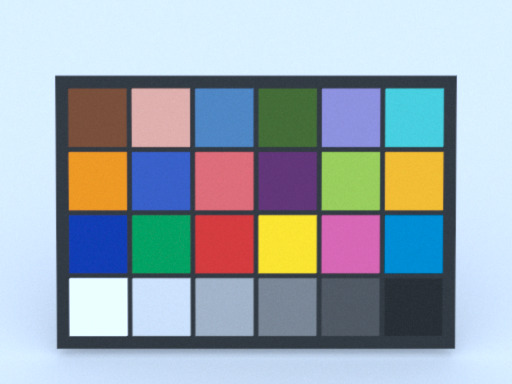 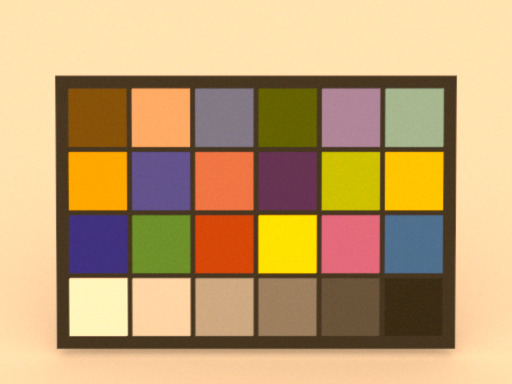 Note the colour cast of the D65 and the F3 image, while the D50 one is more or less neutral. Unless something else is specified by the user, the spectrum → RGB pipeline in ART assumes a white point of D50: so only the image where the illuminant matches the white point of the colour workflow actually ends up with neutral grey tones. This behaviour is in accordance with ICC guidelines for conversions to and from CIELab (which is used as an intermediate step): the default white point there is D50. If proper illuminant-specific white balance is applied to these three images, they look like so: 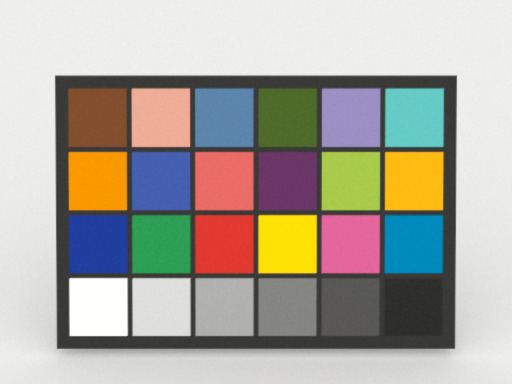 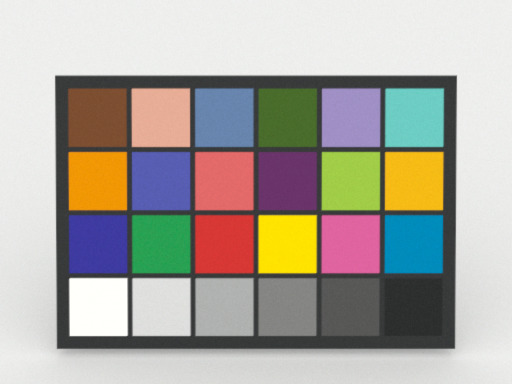 Note that even with white balance applied, the three are not completely identical: the poor colour rendition of fluorescent CIE F3 (it only has a CRI of 57) shows clearly in the rightmost image, as a number of patches in the colour checker end up somewhat distorted compared to normal daylight. Such corrected results are arguably what should come out of the rendering process: in reality, the eyes of an observer who is immersed in the scene would compensate any colour cast of the illuminant.

Being able to properly compensate illuminant colour allows one to focus on the actual colour distortions induced by a given illuminant. The following images show page 14 from the Munsell Book of Color, 050 GY. The left one is illuminated by D65 (the intended light source for this atlas), and the right one by CIE F11, which is a very spiky light source with low CRI. The metameric failures caused by the spiky illuminant are clearly visible: there is no longer a proper colour gradient between the colours, as they are made from different base pigments which are only metameric under daylight illumination. 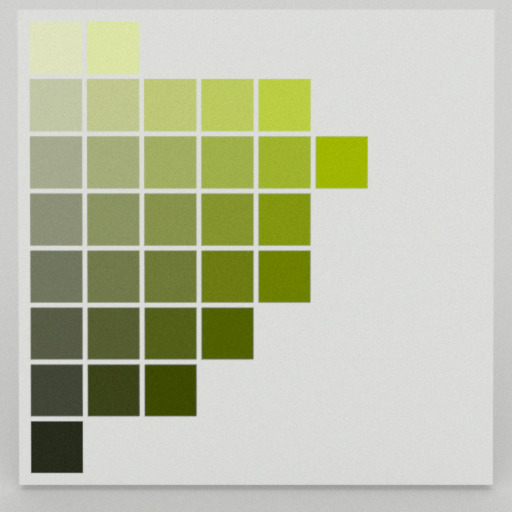 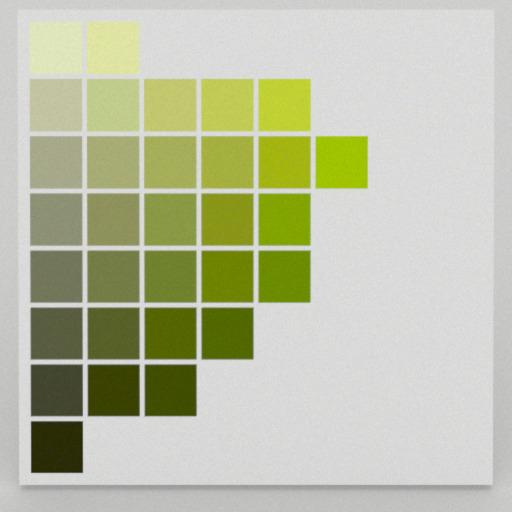 This behaviour of the yellow-green Munsell pages is a known real-life deficiency, and shows the age of this atlas, which was defined before fluorescent light sources were widely available. Being able to reproduce this kind of behaviour is one of the reasons to work with a spectral renderer in the first place.

Starting with version 2.0.1, ART now offers the user options to control this colour correction behaviour. It does so on two levels:

Note that all images in this section were rendered with the option -s18v for denser spectral sampling, as standard 8 channel artraw images have colour accuracy problems for scenes which feature very spiky illuminants like CIE F3. 8 channels are a good space-saving compromise for scenes which feature natural illumination, but are known to be sub-optimal for images of scenes lit by fluorescent luminaires.

Please also note that in version 2.0.1, the white balance functionality outlined here is only available for tiff output. Proper colour handling of exr images will be added in the next point release.

2.0.1 also re-introduces the Oren-Nayar BRDF, which in addition to being diffuse is also somewhat retro-reflective for higher roughness factors. This BRDF has been part of ART for a long time, and was only omitted from the initial public release due to technical problems introduced by interfaces which were altered close to release date. The three spheres in the following images are (from left to right) Lambert, Oren-Nayar with 10 degrees roughness, and O-N with 30 degrees: 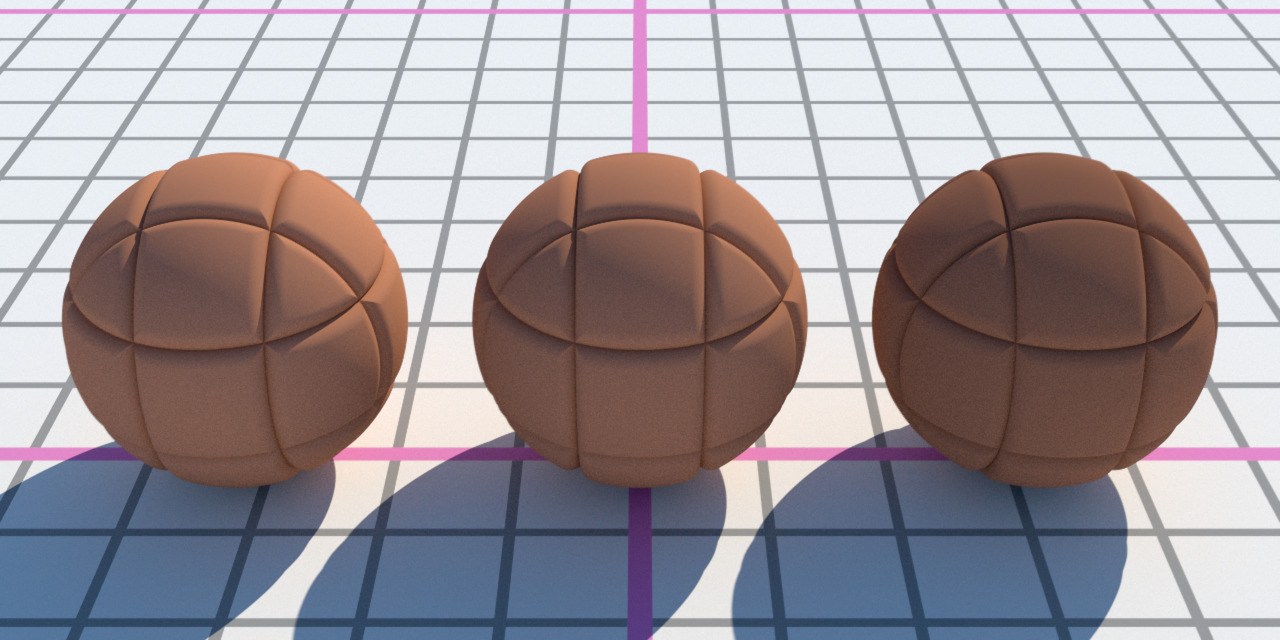 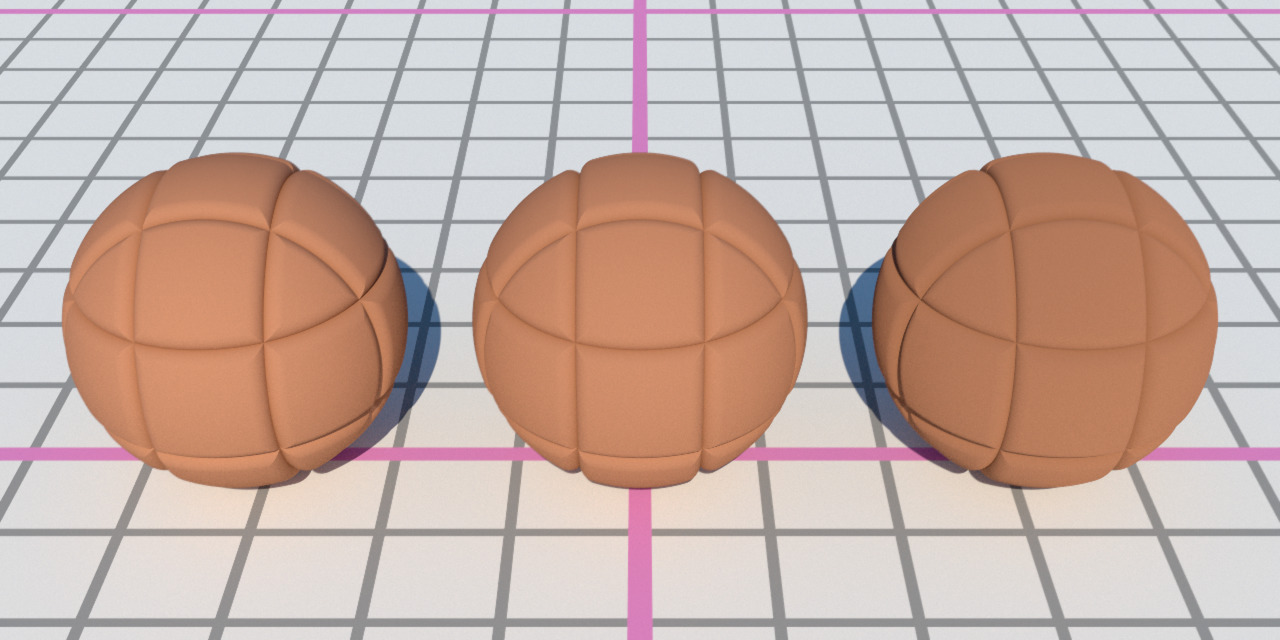 Note the increase in retro-reflectivity seen in the rightmost sphere, and the substantial darkening in the backlit setting. As a diffuse material, this surface can also be given a fluorescent base spectrum.

In the colour chart section of the gallery, there is now a directory with scene files for all pages of the Munsell Book of Color. This is a montage of all results you can get from these scene files: 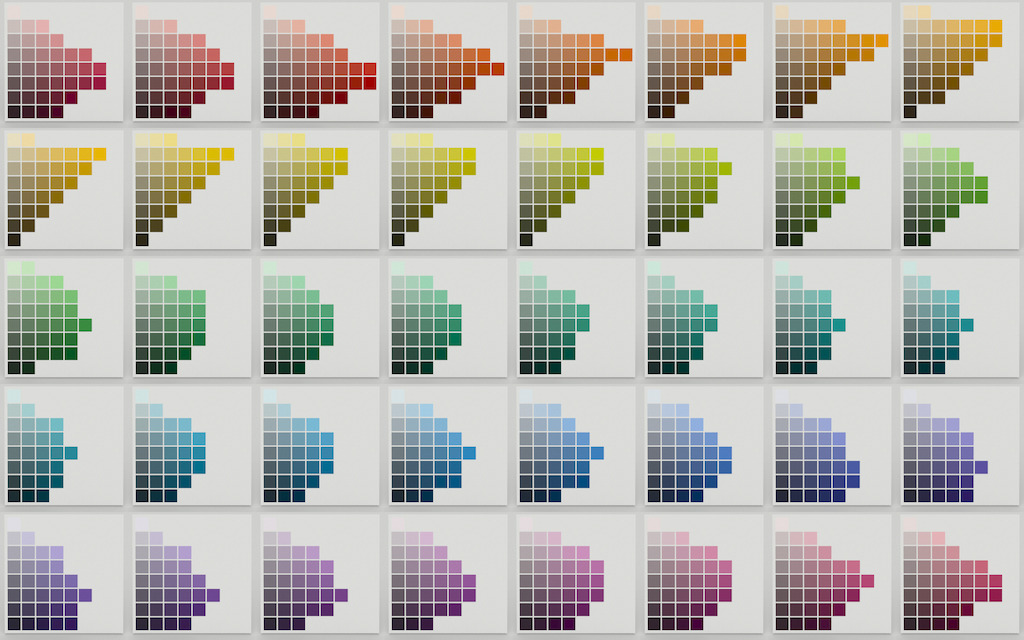 All these pages, as well as the Macbeth Color Checker scenes, can be illuminated by various illuminants (D65, D50, FL3,…): see the README.txt in that directory for details.